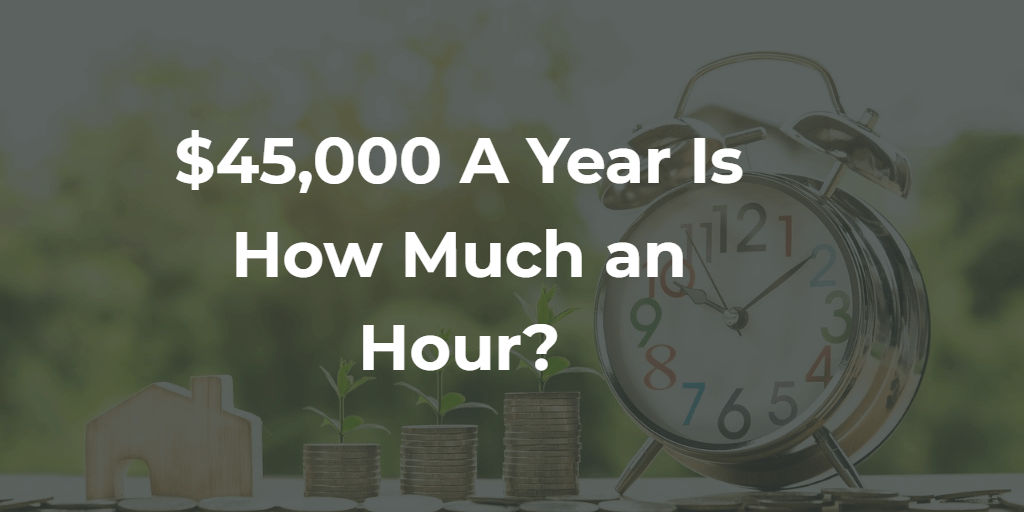 Calculating how much you’ll make after taxes is one of the more stressful things you need to do when getting a new job. It’s important to know what you’ll be earning each month or week helps you plan for the future – but it’s nice to know an hourly rate.

Understanding your hourly rate will not only tell you what your time is worth, but it’s a nice ego boost, too!

But the question remains: 45000 dollars a year is how much an hour?

$45,000 a year equals out to $21.63 an hour before taxes, assuming a standard 40 hour work week. This number is complicated by local laws and taxes, especially for those out of the U.S.

Keep in mind that these numbers will vary heavily based on where you live and the taxes involved.

This one is pretty easy to do the math on before taxes. We’re actually going to be following the same equation each time, with a single variable.

with X being the time variable, and y being your monthly, hourly, weekly, etc. pay before taxes.

It’s important to remember two notes. First, your pay will not look like this after taxes are removed. Generally in the U.S. (assuming this is your only income), you can expect roughly $37,800 per year after taxes. This is, however, a general guideline, meaning it will vary by state and municipality.

Second, your cost of living will vary wildly based on where you live. In a rural area (like where I live), $45,000 is double what most people need to live here. On the other hand, in an area like NYC or San Francisco? $45,000 might get you a closet to sleep in and two cheap meals a day if you’re lucky.

We’re following the same equation again, but dividing by the number of weeks in a year, 52.

Keep in mind, no matter how little this sounds, that the federal poverty level in the U.S. is actually higher than you may think. For a family of four, $26,500 or less is classified as poverty – and if you’re single that drops to roughly $12,500.

This means two things: First, if you make $45,000 with a family of more than four, you’re not that far from poverty. But, if you’re in a smaller family or single, you’ll have plenty of cushion before being broke.

Second, the poverty line is only designed to measure how much you need to live – not comfortably live. If you’re used to the finer things in life, $45,000 will not buy them for you after taxes, rent/mortgage, and food are all taken out.

This is where the math gets fun! There are 365 days in a year, so we just need to plug that into the equation. While you won’t find employers who pay a salary daily, it’s fun, so we’re breaking it down.

This is a really complicated question. As we talked about above, living in a large metropolitan area will make it harder to scrape by than a rural area on the same income.

Let’s assume you just moved to NYC and negotiated a salary of $45,000 for your first “big kid job.” If you’re from a small town, that’ll sound like a lot of money. But it really isn’t when you take into account the cost of living (CoL).

The CoL in NYC is nearly double that of the national average – yikes! If you’re hoping to rent a studio apartment in the city, you can expect it to run roughly $1,800 per month. The more rooms you add, you can expect $500-1,000 added per room. Once you add up the cost of food, car insurance, health insurance, and clothing, things look less fun.

You’ll be cutting it tight, but you can certainly live on $45,000 a year in a large city. And that’s the sad truth about salaries – what’s good in your hometown is likely not going to cut it in a large city.

While $45,000 a year sounds like a lot in theory, it really isn’t. Taxes, cost of living, and family size will all play a role in determining how far that money can stretch. This means that knowing what you’re getting into will be very, very important.

Budgeting for your monthly or weekly expenses will help inform you on how much you can save, if anything. Researching before you move will make it easier to know if you’re being undersold. And living in a suburb (while not everyone’s ideal place to live) will almost certainly save you money in the long run.

Further reading on SMBillion: Interested in other income calculations? check out our 19 dollars an hour rundown.